The resulting 35,605 ounces of silver raised a lot of interest when exhibited at the City of Melbourne Bank in Collins St. Some sceptics asserted the promoters were merely using silver from somewhere else, to ramp up the shares...Another shareholder, the dominating W.R. Wilson had had to lend [William Jamieson, General Manager] a new suit so he could take the first prospectus, printed at Silverton near Broken Hill on 20 June 1885, to Adelaide to start the float process.[8]

In 1915, the company ventured into steel manufacturing, with its operations based primarily in Newcastle, New South Wales. The decision to move from mining ore at Broken Hill to open a steelworks at Newcastle was due to the technical limitations in recovering value from mining the 'lower-lying sulphide ores'.[9] The discovery of Iron Knob and Iron Monarch near the western shore of the Spencer Gulf in South Australia combined with the development by the BHP metallurgist A. D. Carmichael of a technique for 'separating zinc sulphides from the accompanying earth and rock' led BHP 'to implement the startlingly simple and cheap process for liberating vast amounts of valuable metals out of sulphide ores, including huge heaps of tailings and slimes up to 40 ft high'.[10]
The company began petroleum exploration in the 1960s with discoveries in Bass Strait, an activity which became an increasing focus.[11]
BHP began to diversify offshore in a variety of projects. One project was the Ok Tedi copper mine in Papua New Guinea, where the company was successfully sued by the indigenous inhabitants because of the environmental degradation caused by the mine operations.[12] BHP had better success with the giant Escondida copper mine in Chile (57.5% owned) and theEkati Diamond Mine in northern Canada.[13]
The inefficiencies of what was, by global standards, a small steel operation in Newcastle finally caught up with the company and the Newcastle operations were closed in 1999.[14] The 'long products' side of the steel business was spun off to form OneSteel in 2000.[15]
In 2001, BHP merged with the Billiton mining company to form BHP Billiton, the largest mining company in the world. In 2002, the 'flat products' steel business was spun off to form BHP Steel. In 2003, BHP Steel changed its name to BlueScope Steel.[16]

Billiton was a mining company whose origins stretch back to 29 September 1860, when the articles of association were approved by a meeting of shareholders in the Groot Keizerhofhotel in The Hague, the Netherlands.[17]
Two months later, the company acquired the mineral rights to the tin-rich islands of Banka (Bangka) and Billiton (Belitung) in the Indonesian archipelago, off the eastern coast ofSumatra.[17]
Billiton's initial business forays included tin and lead smelting in the Netherlands, followed in the 1940s by bauxite mining in Indonesia and Suriname. In 1970, Shell acquired Billiton and accelerated the scope of progress of this growth.[17] The tin and lead smelter in Arnhem, the Netherlands, was shut down in the 1990s.
In 1994, South Africa's Gencor Ltd. acquired the mining division of Billiton excluding the downstream metal division.[18] Billiton was divested from Gencor in 1997.[19] In 1997, Billiton Plc became a constituent of the FTSE 100 Index.[17]

In March 2005, BHP Billiton announced a US$7.3 billion agreed bid for another mining company, WMC Resources, owners of the Olympic Dam copper, gold and uranium mine in South Australia, nickel operations in Western Australia and Queensland, and a fertiliser plant also in Queensland. The takeover achieved 90% acceptance on 17 June 2005, and 100% ownership was announced on 2 August 2005, achieved through compulsory acquisition of the last 10% of the shares.[20]
On 8 November 2007, BHP Billiton announced it was seeking to purchase rival mining group Rio Tinto Group in an all-share deal. The initial offer of 3.34 shares of BHP Billiton stock for each share of Rio Tinto was rejected by the board of Rio Tinto for "significantly undervaluing" the company. It was unknown at the time whether BHP Billiton would attempt to purchase Rio Tinto through some form of hostile takeover;[21] however, CEO Marius Kloppers met with many of Rio's shareholders following the announcement and reiterated that the offer for Rio was "compelling" and that BHP Billiton is very "patient".[22] A formal hostile bid of 3.4 BHP Billiton shares for each Rio Tinto share was announced on 6 February 2008.[23] The bid was withdrawn on 25 November 2008 due to a global recession.[24]
On 14 May 2008, BHP Billiton shares rose to a record high of AU $48.90 after speculation that Chinese mining firm Chinalco was considering purchasing a large stake. BHP representatives refused to comment.[25]
On 25 November 2008, Billiton announced that it would drop its $66 billion takeover of rival Rio Tinto Group saying that the "risks to shareholder value" would "increase" to "an unacceptable level" due to the global financial crisis.[26]
In January 2010, after BHP Billiton bought Athabasca Potash for $320m, The Economist reported that by 2020, BHP Billiton could produce approximately 15% of the world demand forpotash.[27]
In August 2010, BHP Billiton made a hostile takeover bid worth $40 billion for the Potash Corporation of Saskatchewan. The bid came after BHP's first bid, made on 17 August, was rejected as being undervalued.[28] This acquisition marked a major strategic move by BHP outside hard commodities and commenced the diversification of its business away from resources with high exposure to carbon price risk (coal, petroleum, iron ore). The takeover bid was opposed by the Government of Saskatchewan under Premier Brad Wall. On 3 November, Canadian Industry Minister Tony Clement announced the preliminary rejection of the deal under the Investment Canada Act, giving BHP Billiton 30 days to refine their deal before a final decision was made.[29]
On 14 November 2010, the company announced that it was dropping its offer for Potash Corporation of Saskatchewan.[30]

On 21 January 2009 the company announced that in response to the global financial crisis the BHP Billiton Ravensthorpe Nickel Project in Western Australia would cease operations, with a resultant discontinuation of shipments of ore from Ravensthorpe to the Yabulu nickel plant in Queensland Australia.[31] Subsequently the Yabulu refinery was sold to Queensland billionaire Mr Clive Palmer. Additionally, the Pinto Valley mine in the United States was closed. In total, 6,000 employees were laid off, including those laid off with the scaling back at some other projects.[32]
On 9 December 2009, BHP sold its Ravensthorpe Nickel Mine, which cost A$2.4 billion to build, to Vancouver-based First Quantum Minerals for US$340 million. First Quantum was one of three bidders for the mine and actually produced the lowest offer. The Canadian company plans to have the mine back in production in mid-2011. Ravensthorpe cost BHP US$3.6 billion in writedowns when it was shut in January 2009 after less than a year of production.[33]
On 22 February 2011 BHP announced that it paying cash $4.75 billion to Chesapeake Energy Corp. for all of the company's Fayetteville shale assets which include 487,000 acres of mineral rights leases and 420 miles of pipeline located in north central Arkansas in the United States. The wells on the mineral leases are currently producing about 415 million cubic feet of natural gas per day. BHP plans to spend $800 million to $1 billion a year over 10 years to develop the field and triple production.[34]

The company operates a wide variety of mining and processing operations in 25 countries, employing approximately 41,000 people.
The company has ten primary operational units that BHP refers to as Customer Sector Groups (CSGs):

The Australian BHP Billiton Limited and the British BHP Billiton Plc are separately listed with separate shareholder bodies, but they operate as one business with identical boards of directors and a single management structure. The headquarters of BHP Billiton Limited, and the global headquarters of the combined BHP Billiton Group, are located in Melbourne, Australia, although ex-Premier of Victoria, Jeff Kennett, recently suggested this would change to the Australian mining capital of Perth, Western Australia upon completion of the 44 storey City Square tower currently under construction. BHP Billiton Plc is headquartered in London, United Kingdom.[35] BHP Billiton also has corporate centres in Johannesburg, South Africa and Houston, USA, and offices in Perth, Santiago, Singapore, Shanghai and The Hague.
The company's shares trade on the following exchanges:[36]

After the merger between BHP and Billiton in 2002, Brian Gilbertson of Billiton was appointed CEO. In 2003, after just six months at the helm, he abruptly stepped down, citing irreconcilable differences with the boards.[37]
Upon Gilbertson's resignation, Chip Goodyear was announced as the new CEO. He continued in that role until his retirement on 30 September 2007.
Marius Kloppers was his successor.[38]

The United Nations Environment Programme has noted that BHP’s Ok Tedi mine site’s "uncontrolled discharge of 70 million tonnes of waste rock and mine tailings annually has spread more than 1 000 km (621 miles) down the Ok Tedi and Fly rivers, raising river beds and causing flooding, sediment deposition, forest damage, and a serious decline in the area's biodiversity."[40] The resulting devastation caused by the mining of Ok Tedi has included the loss of fish, a vital food source for the local community; loss of forest and crops due to flooding and; the loss of "areas of deep spiritual value for villagers are now submerged in mine tailings."[41] 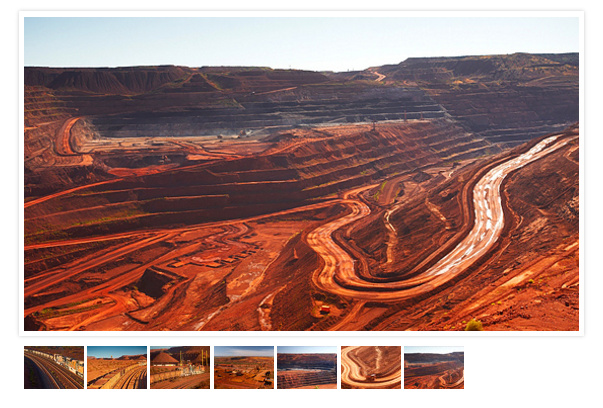